Start a Wiki
Diane "Didi" Pickles is the mother of Tommy, Dil, and Jariel. also the wife of Stu. She is a part-time schoolteacher. Arlene Klasky said that she based the character on herself.

The matriarch of the Pickles' household is usually seen wearing a long red dress and a pearl necklace. Her most prevalent features are her wavy red hair and green round-frame eyeglasses. Without her eyeglasses, she cannot see well. She is a teacher of Home Economics, but she is mainly shown being a mother and housewife. Whenever her sons misbehave, she consults with various media published by her favorite child psychologist Dr. Lipschitz. She follows Lipschitz's words by heart. Didi loves both her children with all her heart. Alongside her husband and his father, she gives considerably more attention to Angelica than the other adults. Additionally, she and Stu discipline her more often than Drew or Charlotte.

She celebrates both Christian and Jewish holidays with her family. It's revealed in Mother's Day that Tommy's first memory of his mother was when he was just born. He remembers being put in an incubator and remembers seeing his mother for the first time. Saying she was the only one who noticed him and that she held his hand, saying "As long as I was there, she never let go". This said, it is possible that Tommy was born prematurely. Judging by Didi and Stu's reactions to her being pregnant with Dil, it is possible that they had trouble conceiving, which may be, in part, why they hold their children with such love and cherishing. Didi admits to Betty in Tommy's First Birthday that she wants to be like the mothers on TV, making her children happy. Didi tends to be the mature one of the family and the main disciplinary one.

Didi has peach skin and a pair of small black eyes. She is often shown wearing a long red dress and round green eyeglasses. The character has wavy red hair and a pearl necklace.

Didi with Tommy in The Shot

Didi in the Laundry Room 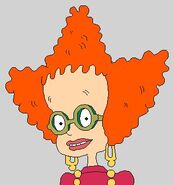 Didi tries to cheer Tommy up. 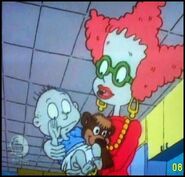 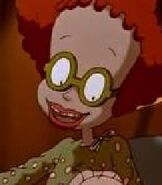 Didi in The Rugrats Movie 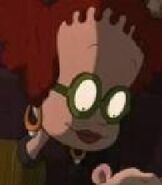 Didi in Rugrats in Paris: The Movie 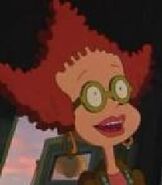 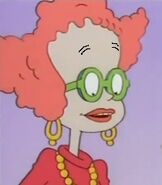 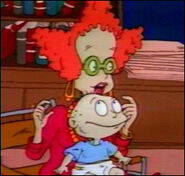 Didi with Tommy on her laps. 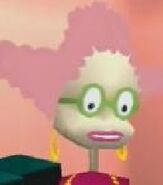 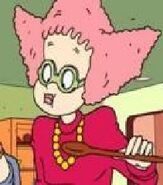 Add a photo to this gallery

Retrieved from "https://jariel.fandom.com/wiki/Diane_Pickles?oldid=5611"
Community content is available under CC-BY-SA unless otherwise noted.